The history of KCI reflects the evolution of the Korean community in San Francisco. 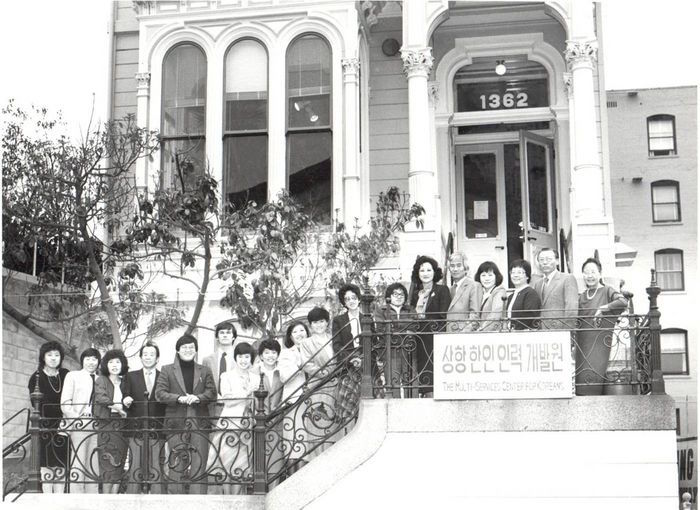 MSCK staff celebrating relocation to a permanent home in the center of historic San Francisco, 1984 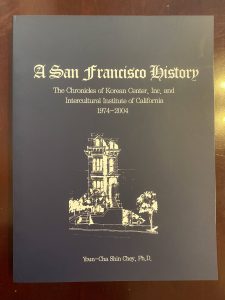 A San Francisco History: The Chronicles of Korean Center, Inc. and Intercultural Institute of California (1974-2004)

From the Forward by Kevin Starr, Ph.D. (University Profession & Professor of History, University of Southern California; California State Librarian Emeritus) — “This, finally, is a history of culture and value, of importance not only to the story of Korea and Korea-America, but to the story of San Francisco, of California, and of the United States, where Korean-Americans continue to contribute to the society they helped bring into being.”

San Francisco has always been a principal port of entry for Korean immigrants to America, but from the first immigrants to arrive in 1903 until the1960’s, they arrived in a trickle. After the repeal of severely restrictive Asian immigration quotas in 1965, with the signing of the Hart-Celler Act, a Korean community began to emerge in the San Francisco Bay Area. In 1974, a group of community leaders recognized the need for a nonprofit organization to address the myriad needs of newly arrived Koreans. They founded the Korean Advisory Council (KAC), which would eventually become the Korean Center, Inc. (KCI). KAC undertook projects of acculturation, employment and language training for Korean immigrants and these projects coalesced as the Multi-Service Center for Koreans (MSCK), which was incorporated in 1975 with an office on mid-Market Street in San Francisco.

The organization’s reach and impact in the Korean community quickly spread, and during the 1980s. During this period, Koreans were California’s fastest growing immigrant population. A youth educational program, senior employment training, and computer programming classes were added. A campaign was also started to find a permanent home, culminating in the 1984 purchase of our current building on Post Street. This move resulted in greatly expanded classroom and meeting space, and the creation of a library.

During the later half of the 1980’s, with shifts in patterns of immigration and growth of the reputation of the organization’s job training and placement programs, it attracted an increasing number of other underserved minorities, particularly Russians, Southeast Asians, African Americans, and Latinos. The center embraced this change, while maintaining pride in its Korean roots. No longer a center only “for Koreans,” the organization’s name was changed to Korean Center, Inc. in 1989. During this same period, after the 1988 Seoul Olympics and the emerging prominence of South Korea as a global economic power, KCI for the first time began to offer Korean language and cultural programs for interested non-Koreans.

The 90’s saw dramatic growth of the Bay Area Korean community, whose number had reached 50,000 by the end of the decade (from less than 2,000 in 1970) and the emergence of a second generation of Korean Americans. Increasing demand for its educational programs led KCI in1994 to create a new organization, the Intercultural Institute of California (IIC), to manage programs in: English language, Korean language, business classes, and a new Masters in Korean Studies. The graduate program granted degrees starting in 1996, began an innovative online program in 2001, and in 2004 became the first fully accredited masters program in the U.S. dedicated solely to Korean Studies.

In 2012, KCI was awarded an affiliation with the Sejong Institute (세종학당), the newly formed international educational program of the government of South Korea. KCI’s Korean language and cultural classes were moved from the auspices of IIC, which retired its Korean Studies masters degree in order to focus on its highest demand service as San Francisco’s most affordable, high-quality ESL program. IIC and KCI have since been separate non-profit organizations sharing one Board of Directors. Since then, KCI has continued to work on refining and improving its programs to meet the needs of the communities we serve.

Al Gore offers his congratulations to KCI for its 20th anniversary, 1994

Bill Clinton offers his congratulations to KCI for its 20th anniversary, 1994